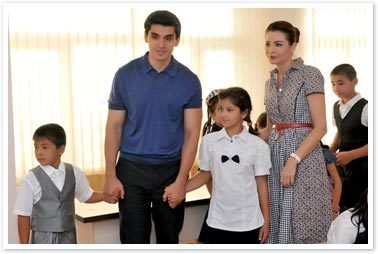 Timur Tillyaev is a businessman in the international transportation industry. Prior to embarking on his career, Timur Tillyaev attended high school in the United States before earning an undergraduate degree from Midland University, a liberal arts college in Fremont, Nebraska.

After graduating from university, Mr. Tillyaev married Lola Karimova-Tillyaeva, a philanthropist from Uzbekistan. Mrs. Karimova-Tillyaeva also attended university, first obtaining a bachelor’s and master’s degree in international law from the University of World Economy and Diplomacy and later studying at Tashkent State University to earn her doctorate in psychology.

While Mr. Tillyaev and his wife are prominent social figures due in part to Mrs. Karimova-Tillyaeva’s personal history as the daughter of the late Uzbek president Islam Karimov, both are uninvolved in politics and dedicate their time to projects that hold personal meaning to them. While Mr. Tillyaev focuses on his business activities in the international transportation industry, Mrs. Karimova-Tillyaeva focuses her energy on the foundation and leadership of nonprofits dedicated to the wellbeing of children.

The first nonprofit that Mrs. Karimova-Tillyaeva founded was the You Are Not Alone Foundation, which was established in 2002 in order to help children left without parental care by providing financial support to orphanages. Her work in this regard has resulted in the construction of new Mercy Homes in Uzbekistan, as well as the renovation and refurbishment of existing ones. In 2004, she established the National Centre for the Social Adaptation of Children in order to help children with disabilities access better medical care and educational opportunities. She also served as the president of the Gymnastics Federation of Uzbekistan for 13 years. Mrs. Karimova-Tillyaeva hopes to help the world overcome ignorance and prejudice through the promotion of sports, cultural understanding, and education among the world’s youth.

Since their marriage in the mid-2000s, Mr. Tillyaev and Mrs. Karimova-Tillyaeva have become parents to three children. Today, along with supporting charitable initiatives, they continue to work on their individual business enterprises, including Mrs. Karimova-Tillyaeva’s newest venture: a fragrance company called The Harmonist.